A Side of History

After a three day backpacking trip over the 4th of July weekend, my husband and I took a break from the traffic to eat a well-earned meal at the Route 55 Cafe in Cascade, ID. Ambrose had eyes only for the biscuits and gravy, but I had to take some time to decide what I would want to eat. We don't go here regularly enough to have a table that we typically sit at, but I don't believe we ever sat in the corner we chose before. 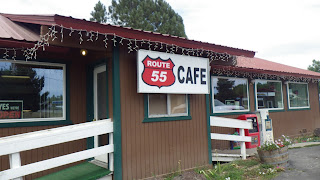 And while I might have noticed the old photographs on the wall in the past, they were never all that interesting to me. Sure, old photographs are neat, but there was nothing to connect me to them.

A waitress took out order (I decided on fried fish and french fries), and I read the captions on the picture without really thinking about it. I read things automatically. I'm one of those people who would read shampoo bottles in the bath if I finished my book before I wanted to get out. So the words didn't register for a moment.

I've been reading Dean Wesley Smith's blog for a couple years now, and he writes a series of books set in Idaho called Thunder Mountain. Here I was, sitting under photographs of the actual Thunder Mountain settlement, and even the town of Roosevelt before the flood.

I didn't grow up in Idaho, and I don't know much about its history. But seeing those photographs and knowing more about them than the bare minimum revealed by the captions really caught my interest. A whole town swallowed by a flood. A mine. And such an iconic name. Thunder Mountain.

So I took pictures of the pictures.


Now I'm just might have to crack a history book to satisfy my curiosity... Or just read the Thunder Mountain series and see if I might like some Westerns after all.