Last week at work was one of the craziest weeks I've had there. In a normal year, a busy week would have been loading 1000 applications in a single week. Last week, we loaded over 4000. It felt like madness, and I'm so glad it's over.

I'm also glad that I was able to keep up my writing in the face of that work time madness, even on days when I had to do some work from home in the evenings because of the madness. There was one day that I missed my production work goal, but that was more from my computer crashing than anything else. I really need a new computer, and so does my husband, but we just can't bring ourselves to budget for them. Not when there's so much backpacking gear to buy.

I've picked the pictures for the solo trip book, and I'm working my way through captioning. I'm also doing some more culling as I go through, because when I try to come up with captions, and they're redundant, that emphasizes where I have too many pictures of the same thing. In this case, the gravel roads that make up the ICT in the section I was hiking. Still working on day 1, but I think I'll get a good push in next weekend.

Another recent point of madness relates to my recent annual checkup, wherein my cholesterol levels turned out to be just a bit higher than my provider preferred. So I got a call telling me to avoid fatty meats and increase exercise. I wanted to laugh over the phone at that one, but I refrained. Because I already exercise a lot. I've gone to at least 20 CrossFit classes per month for the last 14 months. I bike commute to work. I hike long distances on a regular basis. Increasing exercise would leave little room in my life for anything else.

But, by the BMI scale, I'm "overweight", so I'm sure that was simply the standard talking point. Because that message didn't come directly from my provider, and I did tell her just how much I exercise. I had really good cholesterol when I was eating oatmeal on a regular 5 day a week basis, but then I got diagnosed with IBS and oatmeal was one of the things that I got triggered by, so bye bye oats. Maybe I'll try oats again and see how they do, but I'll probably wait until a month or two before my next annual check up for that trial.

In the meantime, I'm going to keep up my "normal" level of exercise and focus on the things I can control.

Well, my streak is growing. I've had 1000 words a day every day since I started last Monday. It's funny how I can get 1000 words or more per day when I'm focused on writing a particular project, but once the project ends, my writing dries right up. Of course, part of that is because I have the habit of moving on to the next part of the work for these particular projects.

Or it's because I'm focused on backpacking during the season. That's what ended my streak after writing up the solo hike in June.

But right now, I'm moving forward with production work for the next ICT book, which I still haven't named, as well as writing up the coast. Plus, I've started to implement my Spartan plan. I had personal training over the last weekend and yesterday I started my first day of accessory work at the rec center.

So I've been busy... And I haven't been as diligent in getting back to keeping track of symptoms as I'd hoped. Maybe because that's not for public consumption, so I don't have as much incentive. Or maybe I'm just a bit depressed about the whole thing. Drinking more milk has made some changes in how my digestive system is working. Overall, there's more movement, which is good. But some of the of the movement is more urgent, which is not as good.

In conclusion, on Monday night, Boise was treated to some wonderful rainbows.

Sometimes writing down a goal can be motivation enough to start getting moving on it. I use this blog to motivate myself at times. When I know I need to start, but I don't want to start. See, because if I say I'm going to start here, if I give myself a deadline here, then I'm accountable.

Not really to anyone but myself, but it's enough to move the motivation meter from apathy to work.

I'm making progress on the coast write up. Over 1000 words on Monday during my lunch hour, because that's a good time for typing. Another 1000 on Tuesday, after work because I wanted to be able to type that I did over 1000 words two days in a row here.

I've started on the production work for the solo hike book from May, which gets easier once I start, like so many other things. So far I've made initial picture selections for the first two days of the trip. After I've made initial selections, I'll drag Ambrose into it to try and cull some out, and then I'll start the captioning process.

I've fallen off the bandwagon on keeping track of my symptoms too. For some reason, that's a harder one. I was doing really well on tracking for a while, and then I just got fed up with counting how many bowel movements I had per day and whether I had a headache or what I had to eat that day. But that stuff is important if I'm ever going to get a good handle on the whole IBS thing, so I guess I'll challenge myself here for that, too.

Got to get back to tracking and keep on with the writing and production work. And with exercise; even though I've been doing CrossFit on the regular, I haven't been taking my exercise release on a regular basis for nearly a month now. But by next week, I should have a new strength plan to help me get Spartan ready for next June.

It was kind of funny, the personal trainer asked me whether I was going to try doing a longer Spartan race. I had to explain that before I go beyond a sprint, I'd like to do a smaller proportion of penalty burpees. Having completed 210 of a possible 240 penalty burpees, I can see plenty of room for improvement on that front.

On my last backpacking trip up to Spangle Lake with Ambrose, I had some good and serious thoughts about getting back to writing. I have goals for this year, books that I want to publish before the end of the year, and for that to happen, I need to get my nose to the grindstone a bit.

I have the write up to finish on the Olympic Coast trip. And when I say finish, I almost more mean start, because I've hardly started that. I do have the writing part of the first solo trip down, so I need to work on pictures for that - production work. And then there's the CrossFit book, which needs commentary and review to be completed. Plus I want to do a few workouts over again for comparison's sake. So I need to choose those.

Now, the trip on which I had all these plans was finished over Labor Day weekend. And I'm sad to report that I did not get my nose to the grindstone in the month of September. I've got excuses, of course. I went to a work conference for a week. I had a mini-solo hike to take care of at the end of the month. And work was particularly busy for good reasons I won't discuss here.

But in the last week, I've started to run the grind stone up. I haven't gotten my nose to it quite, because I'm not yet committing to specific word counts, though I'm thinking about it. For now, I'm just trying to get some writing each day. And I'll try for some production work each week, though each day would be better.

I know my process by this point. If I can get started on the pictures, I'll have a hard time stopping. And then it's just putting the book together and I'll be done with one. And three more to go before the end of the year. Plus a little update to the Chamberlain guide book.

I believe I can do these things. I just need to get back into disciplined habits.
Posted by JB at 8:15 AM No comments: Links to this post

Then I Got Sick

Before last weekend, I had a few times where I thought to myself, gosh, it's been a long time since I've vomited. Despite all the nausea from the IBS, it never turns into anything.

I can't say that anymore.

Though I can't entirely blame the IBS for whatever stomach bug I got since my husband got it too.

At least I finished as much of my hike as the Prospect Fire would allow.

Here are some pictures taken driving above Lowman of the Prospect Fire in the distance: 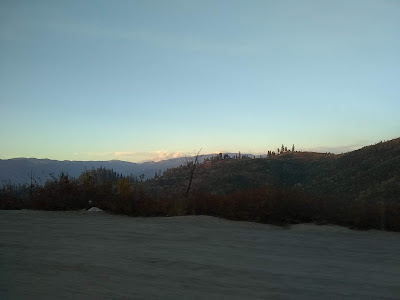 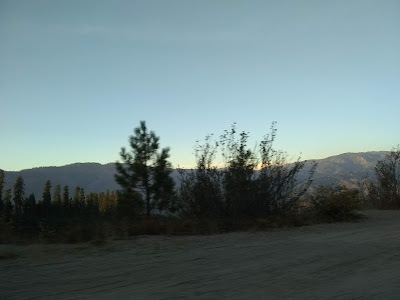 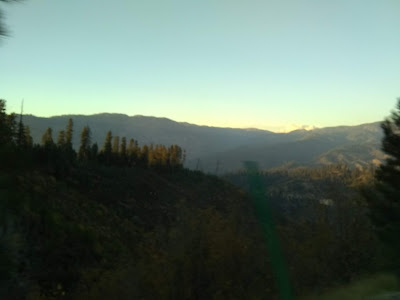 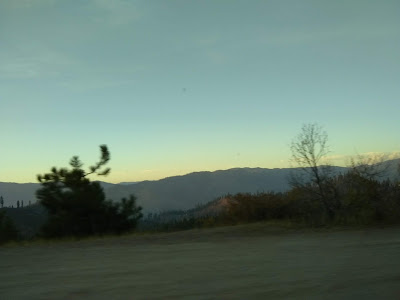