I take a shake to work most mornings as a morning snack. It's a healthy snack that's portion controlled and fairly tasty. The specific brand is Aloha; it's vegan and organic and all sorts of other good things. The key factors for my tastes are that they do not include artificial sweeteners or too much sugar. My husband mixes the shake up for me using an almond/coconut milk blend. He rotates through the flavors pretty randomly.

And the other day, he decided to "mix" things up by combining the chocolate flavor with the banana flavor.

This is the review that I gave him:

The theory behind chocolate banana is a sound one. Chocolate is good. Banana is good. Chocolate and banana together typically form a harmonious whole - though I've never been fond of the frozen chocolate covered banana personally, since everything just gets so hard.

With this chocolate banana shake, we have an added complicating factor of the almond/coconut milk, which has its own delicate flavor to contribute.

Overall, the flavor combination certainly exceeds the palatability of the vanilla, which I consider the worst of the Aloha flavors. It even exceeds the pleasant flavor of chocolate alone, and also the disappointment of the banana flavor mixed with water.

However, it falls short of the delight of pure banana mixed with almond/coconut milk, which remains the champion of the Aloha flavors.

The other day I saw a leaf bug (katydid) on a bicycle seat at my apartment complex. Not my bicycle seat, but one that I pass by on the way to the parking lot. I was enchanted and took a couple of pictures. I don't know that I've ever seen one before or at least one so big. 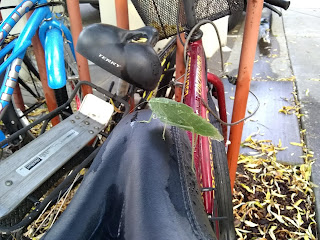 And then, on Monday, I saw another one (or perhaps the same one), perched on the wall above the door to my apartment. 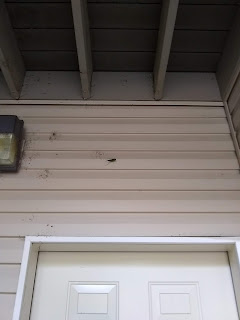 It is as if the insect noticed my fascination and picture taking and decided to grace my threshold with its presence. A blessing, if you will. A benediction.

Not sure how it figured out which door was mine, but if I'm going to ascribe such intentions to an insect, I suppose I can hand-wave that part.

Email ThisBlogThis!Share to TwitterShare to FacebookShare to Pinterest
Labels: Photos

I was hoping to get more writing done than I did after getting back from the Olympic Coast. I wanted to start writing the trip up and get a good start on the next Hike with Me book.

At first, I was recovering. Absorbing the experience of having backpacked for 9 straight days. And then, I started to feel ill. My head felt fuzzy and muzzy and I just didn't feel like writing. Never quite sick enough to miss work, and I kept up with exercising because I often find that makes me feel better. But I neglected the writing.

It was easy to neglect. Get home from a long day of focusing on work stuff and just relax. Or go to bed early. Or do some more exercise. Just nothing that required too much thought, please. Or sitting at the writing desk, which isn't set up as ideally as I'd prefer but until I come into some money that's earmarked for a new computer, that won't change.

I got my blogs done and posted, because I've got a streak. It isn't as impressive as a daily blog streak, but I have been doing two blogs per week for something like four years now? I started this blog in 2013, but only averaged 1 post per week for the first year. And it was some time in the middle of that when I started the hiking blog. So, it's hard to tell exactly how long this streak is. It depends on the definition I choose.

But I've been writing, on this blog, on a regular basis for a good long time. I write these blogs even when I don't feel like it because of that darn streak. I don't want to lose it. Even on the rare occasions when I forget to post one by the 8:15 am Wednesday "deadline" I have never gone more than a day without posting something backdated to that correct time.

When I've gone on a streak of writing, I've felt that same urgency to keep it up. But it is incredibly difficult to write to a streak while backpacking. Because usually, it's about getting to a certain number of words, and that means handwriting, then counting, then transcribing when I get home. It's doable, I've done it, I just don't like it.

So I didn't write much after the coast trip. And I might not write much between the Chamberlain trip and the Spangle Lake trip. But after the season is over, I want to push myself to do those hiking write ups at 1000 words per day again and get them done. I want to be prepped for my books by the end of October and start getting them out in November. Three Hike with Me books by December 31st is the challenge, and I have to get in gear to get it done.
Posted by JB at 8:15 AM No comments: Links to this post

Travel to the ONP

Last time my husband and I went to the Olympic National Park for a hike along the coast, we drove to Forks, WA, where we would start the trip from, in one day. The next day, we drove to Port Angeles, WA to pick up our permit and then back. About an hour drive each way. This time, we chose to do things a little differently.

We took two days to travel, even though the drive can be done in one. We spent a night in Yakima, WA. I got a hotel room through Priceline (which actually books hotel rooms through booking.com). It was a cheap one, and I'm pretty sure that's how my credit card number got stolen.

But it was nice to take our time on the way. We got to drive all in daylight and see the landscape that we were driving through. I'm pretty sure I saw a mountain lion on the side of the road. It looked like it had been hit and was just getting up, but only its front legs were working. We drove by so quickly I can't be completely sure I saw it, but I think I did.

It was nice to stop for the day in the early afternoon. Although, for some reason, the hotel didn't have our confirmation. So the clerk gave me a number to call. But it was the wrong number. The Travelocity guy kindly transferred me to the booking.com people, who, after much conversation, finally resent the confirmation to the hotel and we got a room.

It was a horrible room. I mean. It was pretty much what we paid for. It was cheap. So cheap that there were holes in the floor, stains on the walls and the beds were pretty gnarly. But we made do and there was a good restaurant less than a block away where we got a yummy dinner. I slept alright that night, and we left bright and early the next morning and drove to the Wilderness Information Center in Port Angeles.

At Port Angeles, we got our permit, adding another night to it, because Ambrose had thought we didn't need the permit for camping near Hole in the Wall, but the ranger corrected that assumption. Since we were doing so many nights, we had purchased a yearly pass instead of paying by the night. That allowed us to add another night without paying extra. Totally worth it.

From there, we drove over to Forks and got a campsite at the Riverview RV Park. We got set up there and waited for the third member of our party to arrive. On this trip, we were hiking with a man Ambrose had met through an online backpacking forum. Bill also lives in Idaho, but in the north. This would be his first trip on the coast.

After some packing and repacking of our required bear canisters, we did some driving around the area. We stopped in La Push and took a walk around First Beach. Then dinner and back to the campsite for the night. The next day was really just a matter of waiting for the tide to be right for starting the hike.

The events that led me to getting diagnosed with IBS started after my first backpacking trip to the coast of the Olympic National Park. I was so worried about the pain in my abdomen that I cancelled my solo trip that year, because I didn't want to have the pain escalate when I was hiking alone in the wilderness. I got all sorts of tests and finally got a diagnosis the following January.

I've been back from the coast for a about two weeks, and I have noticed an increase in abdominal pain. About a week after we got back, the IBS felt like it started to flare up. And about four days ago, the pain got intense enough to interfere with my getting a good night's sleep. I imagine the next thing will be increasing pain, changing from burning to sharp.

I have to wonder if there's something about the radical change in environment that affects me. Hiking on the coast exposes me to very high humidity. Close to 100%, I'd guess, when the fog is rolling over the beach. And Boise is in a high desert environment. Mostly low humidity - it's kind of amazing how quickly things dry here, especially in the summer heat.

Or maybe there's something in the water that works its way through my system. It probably isn't food related, because I eat what I eat on any backpacking trip there. There is an exception - we've only ever had smoked salmon while backpacking on those trips, but each time we did, the sources were different - and it isn't like I don't eat salmon regularly at home in Boise.

I don't have problems when I'm on the coast. I can get to a point when I'm having less problems while I'm in Boise. But moving from the coast to the high desert causes problems.

Of course, the problem with this theory is that I've also spent some time in South Carolina, not known for a dry climate, and returned without having these same kind of issues. Although I wasn't backpacking in South Carolina. I spent most of my time in air conditioned, climate controlled buildings. I mean, yes, we went out on the lake, but I spent every night inside a house. So there is a difference in exposure level.

I guess if I want to prove this, I'll have to travel to some other humid place and go backpacking. Maybe without any smoked salmon.
Posted by JB at 8:15 AM No comments: Links to this post