I really thought I was done being sick. The weather was getting warmer. Spring had sprung. And I was done getting sick.

But no. It snowed this week, and I've had the worse cold I've had all season since last Thursday.

The worst part is that I haven't been able to call in sick. I had already planned on taking last Friday off because I had to work on Sunday. And I had to work on Sunday because I was going to a conference from Sunday through Wednesday. So on Friday I couldn't call in sick because I was already out. And Sunday through Wednesday, well, I can't exactly call in sick when I'm at a conference for which my department has paid a substantial amount of money.

So I'm pushing through. I'm doing my best to interact socially with other humans while minimizing contact. My default face right now is mouth-breathing exhaustion - not a good look on anyone. Turns out this was extremely bad timing for me not to be consuming caffeine. Sure, it might not actually help, but the fact that I'm not having it makes me feel it would if I could.

I thought about visiting a Crossfit gym while in Salt Lake City, since there was one about a mile from where I was staying, but I am having a hard time walking the two blocks from my hotel to the conference center - I'm in no state to work out, even though I packed workout clothes with high hopes of getting better while napping on the bus.

My husband thinks I need to pre-clean the treadmill at the gym to avoid this kind of illness. I'll try anything, but it makes me sad to have to give up on the idea that the other users of the gym are not filthy beasts who can't figure out how to use a spray bottle.

But that will only help future me. Present me is burning through boxes of kleenex and cold medicine, pushing through and doing her best not to get every other person at the conference sick.

I saw a sign the other day for a story contest. The topic was either song or games. I couldn't tell because the flyer was clearly repurposed from a prior year and indicated both of them as the topic in different places. Song and games made me think of writing a creative non-fiction piece about taking road trips with my family when I was young. It made me realize that I've only ever flown on a plane with my brother once, and I was so young I don't remember it. For our family vacations, we drove. Mostly to either Wisconsin, where my mother's parents had a cabin for family use or to Toronto where my father's parents and sisters lived.

Both drives were long, especially for someone who had and has trouble falling asleep in cars, but the Canada  route was definitely longer. The reason that song and games made me think of those long drives was that my family used to play a game during those drives.

First, the person whose turn it was would whistle a tune, and everyone else would try to get it. If no one had a clue, then someone could call, "hum it," and the whistler would switch to humming. Still nothing? "La-la it," was the next step. The next step after that was conceding defeat.

There weren't really winners and losers in the game, per se. But if no one could guess your song, that meant you weren't performing it very well. So I got frustrated when no one could guess correctly what I was trying to convey. I also took a long time to learn to whistle properly, so this game wasn't necessarily in my wheelhouse.

By the time I had learned how to whistle well, we rarely took family vacations. My mom and I had some trips together, including the first plane trip I remember. My brother and my dad, I think. My dad and I traveled once with his mom and sister to visit Italy, but my dad and my aunt left a day before Nonna and I did. We took the bus together, and she insisted on not paying, which ended in us being taken off the bus by police who tried to tell us we should be fined for not paying the bus. Nonna did her best confused tourist act and I maybe cried a bit and they let us off, exasperated, I think.

Now I live far away from my mother, father and brother. My mother can't travel very easily. My ability to whistle has atrophied from lack of use - perhaps also because I no longer regularly play the flute. There are no more road trips and no more games of Guess the Song. And I didn't write any of this before the deadline for the story contest. I let it sit and simmer in my brain, and let the date slide past, in part because I didn't want to pay entry and in part because I feared the inevitable rejection. Inevitable, because I don't think I write the kinds of things they want to read.

And that's okay. But maybe, next year, I should try anyway.
Posted by JB at 8:15 AM No comments:

Farewell to the Hair Experiment

I thought about growing my hair out. Not a lot, but just a little. Enough to make cute little pigtails or try and curl it again. Enough to see what it was like again and see if it was something that I wanted to do.

Last fall, I had it kind long, almost chin length on the left side and a little shorter on the right. It was cute, but it was also rather boring and safe. I mean, it didn't start that way. The fresh cut was more my style, with the sides being tight and a bit of an undercut. But it grew out horribly boring.

My hair grows really fast. And I just don't end up getting my hair cut very often - possibly out of laziness, I will admit. And so in a couple weeks, my fresh cut became blah and in six weeks it started getting mousy. Not the look I wanted.

So I decided that the experiment was over.

I went to my trusted stylist and told her I wanted to do a pixie cut. She asked some questions about length and I gave her some answers. Then I took my glasses off and let her cut (note: I cannot see a thing she's doing in the mirror with my glasses off).

By the time she was done, there was way more hair on the floor than I'd thought possible.

And way less on my head.

The haircut felt so right.

Often, I need a few days to get used to a haircut; the new way it frames my face or falls over my ears. Not this time. This cut looked perfect right out of the gate. Perfect and comfortable. It was the exact cut I wanted. It makes me happy. 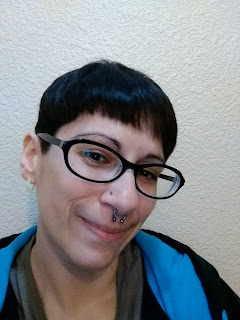 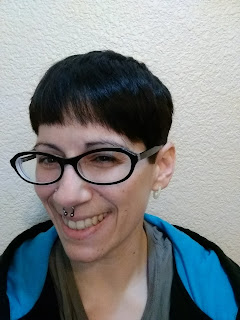 What Happened to the C?

I was diagnosed a couple years ago with IBS-C, which is irritable bowel syndrome with constipation. Irritable bowel syndrome is code for, we don't know why it hurts, but we totally believe you when you say you are in pain. Constipation referred to the way my bowels were stopping up and not letting anything out but pellets for days at a time, which sometimes then all burst out in a quick bout of diarrhea.

I've been focusing really hard in the last few months on getting this whole IBS thing under control. I've been cutting out foods that are supposed to be triggering, like caffeine and alcohol. I've been keeping track of what symptoms I've had and when and even, though I hate it, what I'm eating. Not yet to the point of tracking food quantities, but I am writing down what it is that I am consuming, which is a step.

I've been working especially hard at drinking at least a gallon of liquids every day - mostly water. I will allow myself to count herbal tea as water and coconut water as water, but I typically don't drink more than a quart of either of those in a given day. So I've been drinking a lot, and with consistency. Which seems to have changed the consistency of my bowel movements.

Since I've been tracking things (30 days or so), I've only had a single day when I didn't have a movement, and only three days where I only had dry pellet like ones. Most days, it's multiple movements, with liquid consistency coming multiple times per week. I don't know what the heck is going on, but it doesn't make any sense to me. I mean, it's great not to be constipated, but I'm still getting bloating and pain on a regular basis (including headaches that are driving me slowly insane).

This whole diagnosis is frustrating. I could go back into to see the gastroenterologist, but the I feel like the answer will be, oh, well you must have both IBS C and IBS D so have fun with that. Or, here, try some drugs that won't help. Or, here, have some expensive tests that will show absolutely nothing wrong.

I do think that reducing lactose has been overall good for me. Less pain and bloating. Perhaps it isn't completely gone because I haven't completely given up lactose, but the amounts that I have are minor - an occasional bit of milk chocolate, bread that has milk as an ingredient. Of course, since I decided to cut out cheese, my husband has been craving pizza, and frankly, so have I. Cheese tastes good, and I miss it even though I haven't even been a full 30 days without it.

For now, I'm just going to keep tracking these things and try to figure something out. Or at least be able to bring robust data to the doctor if I do decide to go in and give things another go.