A Review of Duolingo

According to Duolingo, I'm 52% fluent in Spanish, after about 75 days of hard work. I wasn't starting from zero with Spanish. In fifth through eighth grades, my school provided language classes. We took some Spanish, some German and some French, but mostly Spanish. Unfortunately, we could never hold onto a teacher, so we started over every year.

My dad grew up speaking Spanish in Peru, but it was not something that he passed on to my brother and me. There are times that I wish he had, but I do have a good grasp of the English language, so I shouldn't complain.

I started using Duolingo knowing some very basic Spanish and a few phrases useful for greeting and communicating with my relatives. I think that got me past the very first lessons on Duolingo, maybe six of them. I had next to no grammar and a vocabulary that would have prevented me from reading a Spanish version of Dr. Seuss.

My goal was to learn enough Spanish by the time I went to visit my grandmother, who does not speak much English, that I could communicate with her. And, by the time I left, I had attained level 13, with 5700 XP. I'd made it past the irregular future construction and the past and present perfect, both of which turned out to be very helpful, grammatically speaking. I found out, during that visit, that present tense is not very helpful in conversation.

And, I mean, I probably knew that, but until you are trying to communicate with someone while using a limited word and grammar arsenal, it doesn't really hit home. I can rattle off English without even thinking about what tense I'm using, but in Spanish, I found myself struggling to construct a proper sentence. Still, the 52% seemed like a decent assessment. I could communicate most of what I wanted to say, resorting to pointing and pantomime only a few times.

And I could understand the gist of what my grandmother, and other relatives, including my dad, were saying better than I could speak. I might not have known the precise tense they were using, but I could catch the roots of the words and fill in the blanks using context clues. For the most part.

I don't think I'm ready to go and live in a Spanish speaking country, but I think I could navigate through one, though not gracefully. And I feel more confident, having spent some time living with the language, rather than just studying it. I'm satisfied with what Duolingo has done for my Spanish skills, and in a short amount of time. My only complaint is that I'm learning Spain-Spanish and the section on Countries didn't even mention Peru. I guess I'll have to rely on my relatives to catch on to Peruvian slang.

I did not intend to take the class that I'm taking this semester. The class that I wanted to take was incompatible with my work situation. And so, I find myself taking a fiction workshop class, the third such I have taken in this quest to learn how to write better. The first two were in the first year of this experiment. This is the fifth and final year.

Why would I not want to take a workshop class on fiction? It isn't just that the ones I took years ago didn't seem to do much for my writing. It isn't just that I had this instructor before and was not thrilled with the prior performance. The main reason is that I don't believe in the process.

In this class, revision is expected. Not just, write a story, submit for workshopping and then revise. No, revision is seen as an essential part of the process of writing - write a bit, revise a bit, write some more, revise some more. And I think that however well that might work for some people, it isn't how I operate.

I've, perhaps, been reading too much of Dean Wesley Smith's blog. He encourages allowing your creative voice to tell the story. Write the story once and don't revise. To him, revision destroys what makes your story original and interesting. Polishing a manuscript takes away all of its sharp edges - those points that might catch the interest of a reader or an editor (aka the people who can buy your story).

And even before I was contaminated by that particular point of view, I didn't take to the process of revision. Once I've written a piece and checked for typos, I have a hard time revisiting it. But, I also have a hard time getting it out to the public. Part of that comes from not being able to sell the short stories that I write, and part is fear. It's a bit of a loop. I can't sell any stories so I don't want to send any out.

But now I've made a promise. I'm going to be writing a story, a literary story, if you please. And I'm going to be sharing it with other aspiring writers, opening my words and opinions to their critiques. A revision will be due.

Why then, did I take this class?

Because even though I don't want to work the way this class expects me to work, I think it will be a useful exercise. I will figure out what to do by keeping myself aware of what I'm not going to do. I'm not going to insert meaning with my inner critic. I'm going to let myself play with a story, and see what happens.
Posted by JB at 8:15 AM No comments:

Hike with Me: The Wild Coast

Well, it took a little longer than I thought it would, especially considering I had the text mostly finished early in November. But books take the time they take. And life takes the time that it takes. And the important thing is that I've finished and published the third book in my Hike with Me series, a passion project that brings together two of my favorite things: backpacking and writing.

I've learned a lot in the two years since I published my first one. My pictures have improved, and so has my writing. I've finally expanded my distribution beyond Amazon, and I'm looking into other ways to bring attention to my writing.

After last year, I'm not planning ahead as much for this series. I don't know, at this moment, what my next Hike with Me project will be, only that I will have one and it will be the best yet. Because I will keep improving, keep adventuring and keep sharing.

Check out my adventure (co-starring my husband) on the Wild Coast for free through January 31st using this coupon code: LS32T and this link to purchase the ebook (Smashwords account required). It is also available through Amazon and other retailers. 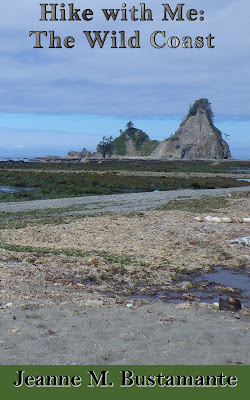 This year, I feel comfortable enough with the process of printing books through Createspace, to take a risk. I will not be ordering a paper copy for proofing this year.

Usually, the first thing I do with the paper proof is admire it. The books look good, to my biased eyes, and smell like books. Then, I brace myself for the editing pass. My first reader goes first, but I have to do my turn, trying to find every possible typo, awkward wording and extraneous word. It's helpful, in that task, to have the paper copy to mark up.

Without the paper copy to rely on, I made notes on paper regarding the digital proof I reviewed this year. (I also got my husband to write notes.) Thanks to my last class on writing creative nonfiction, I was more conscious of phrasing than I have been in the past. I noticed a particular word kept reappearing in the text, whether it was needed or not. Again and again, I wrote "that" when writing nothing would do. I almost did it just now ("I noticed that a particular word").

I know in my initial pass, I caught some of the instances of "that," and marked them for change. But I knew there might be more. And so, after Ambrose and I had both done our read-throughs, and I had made my corrections, I used a writer's most awesome tool: Ctrl+F.

Some of my "that" uses were legitimate. Used as a pronoun? Keep it. That's fine. "At that time" - delete them all! And my uses were, while not ungrammatical, excessive and unnecessary to the flow of the sentences. I left quite a few in the text, but I also deleted over 200 of them. Maybe 300. The version of Word I'm using doesn't count them. I also went after "actually" and "really" with the word hatchet.

And I think that the text is improved for the cuts. It has enough "that," but no more.
Posted by JB at 8:15 AM No comments: