I didn't start writing my solo book until late September this year, and I wish that I had gotten started sooner and could be finished now. Unfortunately, I can't go back in time and change this, so I'm just going to set myself some word goals and strive to hit 500 to 1000 words a day on weekdays and 2000 a day on weekends. That should allow me to finish by the end of November at the latest and then get the book formatted and ready for release in time for Christmas, as usual.

I think I was reluctant to start this one because a part of me was so disappointed in not finishing what I set out to accomplish. But I did make progress on my goal of finishing the Idaho Centennial Trail. Every step is another step closer to Upper Priest Lake Falls. I made some mistakes in my training and preparation last summer that I won't soon repeat.

The experience was incredible, and I learned a lot. Can I really ask more out of an 87 mile hike through the wilderness?

My husband helped me work through an introductory section that will hopefully be a good hook for readers. And I'm trying to think more in terms of hooks in each section of the book as well, so the goal is to have this book be the best written one yet. With every book, I learn more with the practice of writing it. Hard to believe I have eight of these things already, and plans for several more as I continue on the ICT.
Posted by JB at 8:15 AM No comments:

Even before we got a notice that our apartment was to be inspected, Ambrose had been on a bit of purging kick. Time to get rid of the old things that we no longer use, he said. No matter how attached we are to them.

This is hard for me. I grew up as a bit of a packrat. If not for periodic forced cleansings, my mom would have created a hoarder house for us to live in. Ambrose sees a table with a layer of week old mail on it as something nearly sacrilege. I see it as needing no action, because there aren't years old magazines at the bottom of the pile, no rotting food or crusty dishes - and you can see most of the table!

There are some things that each of us own that we are able to decide on for ourselves. For example, I have a broken CD player that's been sitting on my dresser for years. After the CD part broke, I still used it for radio in the mornings. But then the antenna broke, and the improvisation involving a coat hanger didn't really work either. So I only kept it because it still had a working cassette player and I still own some cassettes. If I ever want to play them again, then I'll have to find some other way to do it, because that CD player is now trash. Yay me.

Ambrose has gotten rid of some of his own things, most of which I don't particularly notice. But he also got overzealous early in this process. See, we have a system for laundry. He runs the washer and dryer, and then piles the clothes on a shelf or hangs them up near the shelf if they are work clothes that need to be hung up. On a semi-regular basis, I go through the pile and put everything away. That, by itself, would be fine, but every now and then Ambrose will put some of his own stuff away while he's doing the pile.

This has resulted, on occasion, in a situation where I get to the bottom of the pile and am left with Ambrose's unmatched socks. If we've just come from backpacking, then I will leave the socks on the shelf until the next load comes through. If it's been a while and no match has come through, then I go to his sock drawer and usually find that he put them away at some point.

So when I came to find that I had two right-footed toe socks in the pile, I left them on the shelf for the next load. Only to find, a couple days later, that Ambrose had discovered he had two left-footed toe socks in his drawer. And, having no match for them, he threw them away.

I made a bee-line for the trash can, but he told me he had already put it in the dumpster. I shook my head and handed him the two right-footed toe socks, which we then threw away, having no other choice that didn't involve dumpster diving.

All the little things are really in preparation for getting rid of our old car camping tent. That tent has been with Ambrose a long time, and it's got a lot of memories for both of us. It served us well, but it now leaks. And we have a new car camping tent. It is time and more to be rid of the old one. It will live on in our memories and lots of pictures. We just have to let it go.
Posted by JB at 8:15 AM No comments:

My husband has been doing various computer projects for a while now. He has a little robot he's working on (Chappie, after the movie), and he's been working on a color changing light for my bike that would turn red when a car got close. I don't know how to do most of what he's doing, but I still think it's pretty darn cool.

For example, he's got a strip of LEDs set up to react to sound. It can be a bit annoying when watching television shows, but it's really nice when we're listening to music. Automatic dance party lighting!

The Best Pranks Come to Those Who Wait

Over Labor Day weekend, my husband and I went car camping. We both took our Enlightened Equipment quilts to sleep in, and I was in charge of packing up the tent when it was time to leave the Hart Mountain Hot Springs Campground. I giggled in the tent as I packed those quilts, because while Ambrose was busy packing the stuff outside the tent, and carrying things to the car from the tent, I stuck his quilt into a sleeping bag sack, and then stuffed my own quilt inside on top of it.

To casual eyes, mine would be the only thing inside. Only my orange and gray, shiny-silky fabric would show from the drawstring's hole. I imagined that this would stymie Ambrose for a few minutes when he unpacked the quilts to air them out on the porch. That's our standard operating procedure - go backpacking or camping, and then air out the gear that can't go in the washing machine, like the tent and the sleeping pads - and the quilts!

Imagine, now, my complete and total shock to find out on October 5th that my husband had spent several days in the last week contemplating how to tell me that he had lost his quilt and that we would need to find the budget to replace the $500 piece of extremely warm, extremely lightweight, professional backpacking gear.

Days. Days he had been mulling this difficult topic over.

And he didn't say a word to me about it.

Until October 5th, when he told me that he had found his quilt.

I laughed, until he told me how worried he had been. Okay, I also laughed after that. But I did feel a little bad that he was so worried.

I also felt a little bit in awe of myself. I tend to spoil the joke by giving it away. But this time, I laid down a solid little joke, and let it be. I hadn't thought about it much since the day I packed the two quilts away like that. When he didn't say anything about it, maybe I had a thought or two that he didn't notice. But I didn't really consider it.

This time, I had let my trap lay without paying it any overt attention, and I had completely tricked my dear, older and wiser, husband.

He really needs to be more careful about teaching me his tricks.
Posted by JB at 8:15 AM No comments:

Email ThisBlogThis!Share to TwitterShare to FacebookShare to Pinterest
Labels: Essay

The other day, I was walking on a bridge and realized that it was the home for a whole lot of large spiders. Orb-weavers, mostly, I'm told. It was really neat that once I started noticing one, suddenly there were so many more. I paused to get pictures, while my companion urged us on, because she was less of a tolerance for spiders than I do. I think being afraid of spiders is one of those things that I thought was the appropriate thing to do, so I did it.

I mean normal North American spiders, not scary movie spiders (or Australian spiders). I've stopped jumping and screaming whenever I see a spider in the house, and I usually either let them live (and eat bugs) or put them outside alive.

I still don't think I'll be watching the movie Arachnophobia anytime soon though. It might still give my nightmares. 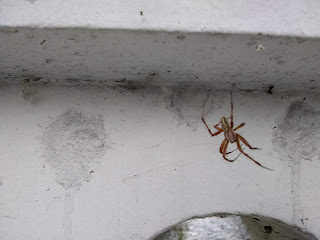 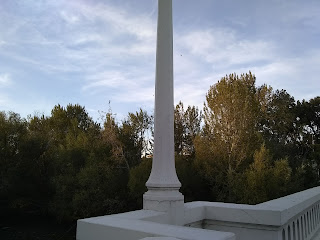 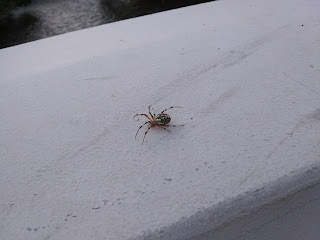 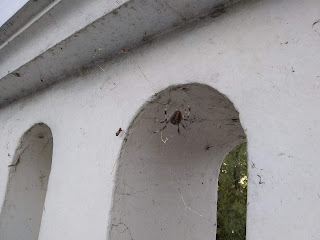 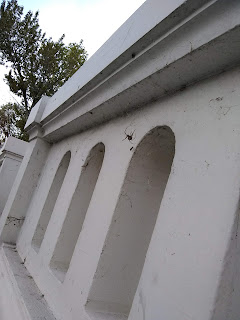 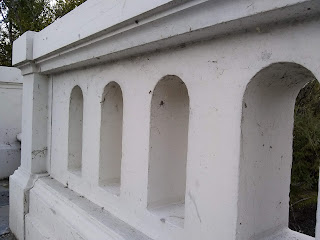